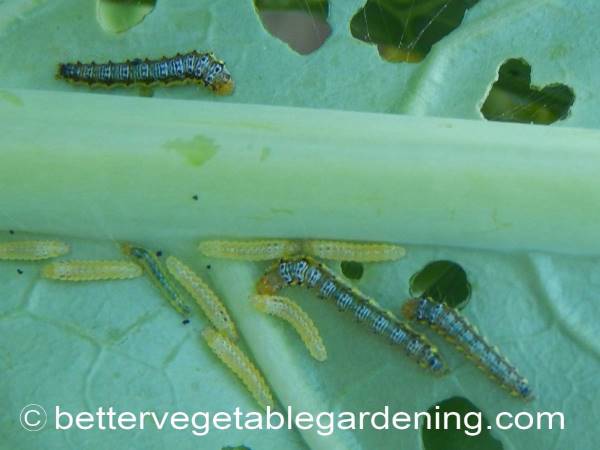 There is nothing worse for gardeners than discovering their carefully nurtured garden being ripped apart by vegetable garden pests bent on eating their way through your crops.

But before you bring out the big guns and obliterating everything that moves you need to find out who's who in your garden and correctly identify the different types of garden pests that could be the culprits.

Why bother, why not just annihilate them all. Because at any one time there are countless insect in your garden, probably more than you realize. Many of them are beneficial insects that pry on the insects you don't want and  perform many of the tasks that make for a healthy ecosystem within your little garden patch. 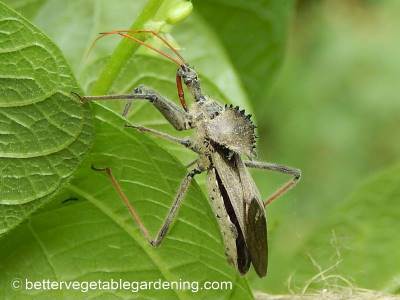 One good reason for wanting proper identification of vegetable garden pests is this wheeler bug. Looking evil enough to be a garden pest, is actually a beneficial insect, one of the good guys. They are relentless predators of any soft-bodied insect unfortunate enough to be in the same place as them.

If you want to find out who the good guys are head on over to the beneficial garden insects page.

One of the most common vegetable garden pests are aphids, they always seem to find their way into every garden. They are a small, soft-bodied insect with different species covering a wide range of colors from black, white and gray to yellow and green. 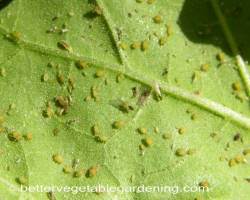 How To Identify And Kill Aphids

Aphids multiply quickly, but if detected earlier enough are relatively easy to control. For more information on  how to identify and kill aphids

Bean leaf beetle adults are oval-shaped and about 1/4 inch long. Color can vary from red to yellowish-green. Usually they have four black spots and black markings along the outside margins of the wings however some will have no markings at all. 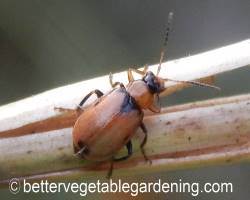 Whatever the color and number of spots however you will always recognize a bean leaf beetle by the black triangle at the top of its wing covers. For more information on how to deal with this pest follow this link to Bean Leaf Beetle

Getting its name "looper" because it arches its body as it crawls, the cabbage looper caterpillar particularly enjoys feasting on members of the Brassicaceae family. Including cabbage, broccoli, cauliflower, kohlrabi, collard greens and brussel sprouts. Its appetite is not restricted to these crops either, tomatoes, cucumber and potatoes are sometimes on the menu. 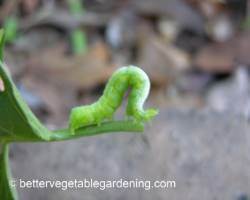 The caterpillars of these vegetable garden pests grow to about 2 inches (5 cm) long they are green with silvery or white stripes running down their backs. The adult is a rather boring looking brown moth.

The adult of this very destructive caterpillar is a moth with a wingspan of about one inch. The front wings are straw colored, marked with olive or purplish-brown, and crossed by narrow transverse lines. The second pair, or hind wings are transparent and whitish. 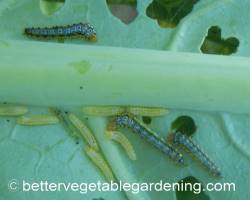 The Cross-Striped cabbage-worm is a problem on most brassica crops, broccoli, cauliflower, collards, Brussels sprouts, kale and cabbage.

The life cycle for cucumber beetles is about eight weeks. In that time both the larva and adult can do a lot of damage to plants. Add to this the fact that the adult cucumber beetles carry and spread both bacterial wilt organism and squash mosaic virus. They really are a pest you need to stay on top of. 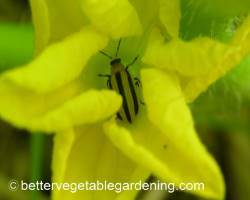 The striped cucumber beetles will munch their way through all members of the Cucurbitaceae family as well as bean, peas and corn. 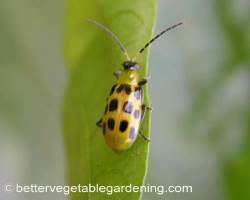 While the spotted cucumber beetle for some reason adds potato, beet, tomato, eggplant, and cabbage to the menu.


There are many species of Flea beetle and among them they can attack pretty much all common vegetable crops. Corn, cucumbers, squash, melons, pumpkin, gourds, eggplant, potatoes, tomatoes, cabbage, lettuce, celery, radishes, peppers, spinach, sweet potatoes, carrots and watermelons are all in the spot light. 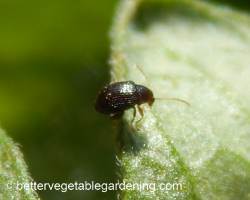 Flea beetles are a tiny beetles that usually jump when disturbed. They damage plants by chewing, what looks like, small "shot holes" in the foliage. 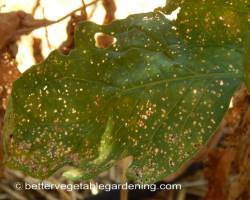 Flea beetles do the most harm to plants when seedlings are just becoming established. Unless there is a major buildup of this pest,as in this image, damage is usually minor and easily outgrown on established plants.


There are numerous different species of grasshoppers and most will eat any vegetation available. In times when hot dry climate conditions prevail and pasture grasses diminish they will shift their focus to anything else available. Their preference is for lettuce, beans, corn, carrots and onions, however other crops are not immune. 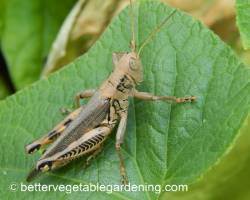 Grasshoppers have thick bodies that range in color from bright green to dusty brown. They have short antennae and large back legs that are bent back on the body which allows them to jump long distances. 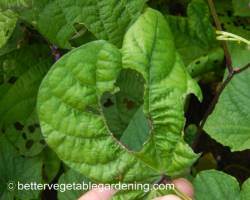 Grasshoppers have chewing mouth parts that can remove large sections of leaves.


Harlequin bug, a species of insect in the stinkbug family. Also know as Calico bug or Fire bug. They are a pest to many vegetable crops but are particularly fond of the brassica family. 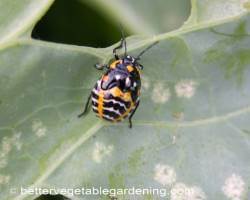 Harlequin bug nymphs, showing typical damage to the leaf. Both adults and nymphs cause damage by sucking sap and chlorophyll from crops. Damage on leaves and stems looks like uneven discolored spots around a hole Young plants may wilt, turn brown, and die.

The June bug is in the Scarabaeidae family. Commonly known as the green June beetle, June bug or June beetle. They are not usually a major pest in the vegetable garden, but the larvae can cause considerable damage to lawns or turf grasses. 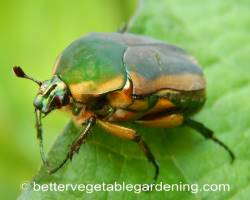 The adult vary in color from dull brown with green stripes to a uniform metallic green. The margins of the body vary from light brown to orange yellow. 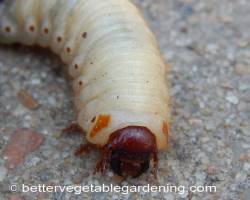 The grubs of these vegetable garden pests will grow to about 1 ½ inches (40 mm) and appear to be white with an amber colored head and brown spiracles along the sides of the body. Go to   White Grubs further down on this page for more on identifying the grubs.


There are many species of leaf hoppers that exist in home gardens. Both adults and nymphs cause damage by puncturing the undersides of leaves and sucking out plant juices. Among the many vegetable plants they favor are beans, lettuce, beets and potatoes. 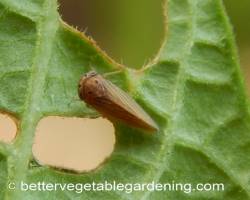 Leaf hopper adults are about 1/4 inch long, slender wedge-shaped insects that will fly off when disturbed. 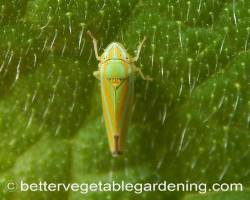 Color can vary depending on species. Green, brown or yellow and often have colorful markings. They are very hard to see with the naked eye.


There are several different kinds of leaf miners, however the plant damage done by all is very similar. Leaf miner adults are very nondescript black flies. It is not the flies that do the damage but the larvae. 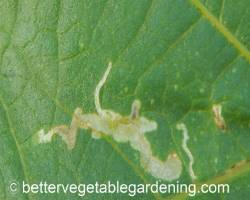 Leaf miner damage to plants is not only unsightly but if left untreated, can end up causing serious damage to a plant. The simple remedy is to remove the affected leaves. This gets rid of the existing leaf miners before they become adults and lay more eggs.

Root-knot nematodes are microscopic plant-parasitic worm that live mostly in soil of areas with hot climates or short winters. Feeding on the roots of many common garden crops the larvae infect plant roots, causing the development of root-knot galls.  With the root system destroyed basically the plant starves to death. 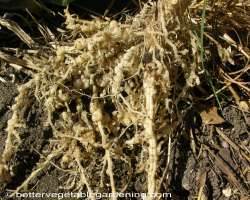 To identify if these devastating little vegetable garden pests are your problem first look for plants that are not performing well. Symptoms can include stunting, yellowing, wilting during the heat of the day with recovery at night. Positive identification come when you pull the plant and find similar to what is in this picture.

The squash bug, is common throughout the United States and is one of the biggest vegetable garden pests. It will feed on all members of the cucurbit family but are most common on pumpkins and squash. Both adults and nymphs cause damage by sucking nutrients from leaves and disrupting the flow of water and nutrients. Their feeding causes yellow specks that eventually turn brown. The plant will wilt and more often than not results in the plant dying. 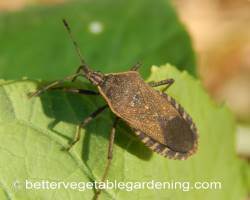 Both nymphs and adults are commonly seen together in large masses. Often in very hot conditions you will find them hiding around the base of the plant. Early detection of nymphs is important, as adult squash bugs are difficult to kill.

In North America late June or early July is the time squash vine borer adults emerge from their cocoons. 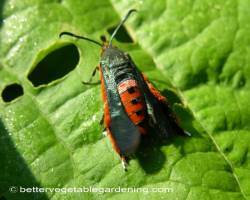 The brightly colored orange and black adult squash vine borer is a moth that flies during the day. It is often mistaken for a wasp or bee because its flight pattern resembles those insects rather than the apparent uncontrolled movements of moths. 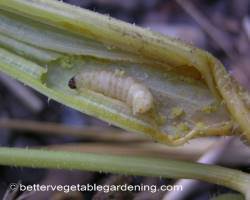 Soon after emerging, the adult lays eggs singly at the base of plants. When the eggs hatch about 7 days later the larvae bore into the center of the stem of the plants. Feeding on the core stops the flow of water and nutrients and the plant wilts and dies.


Are a member of the Hemiptera order of insects. This rather large collection of insects are known as true bugs which share a common arrangement of sucking mouth parts. Making them particularly efficient in causing major plant damage to food crops. They have glands in their thorax between the first and second pair of legs which produce a foul smelling liquid when threatened, hence the name stink bug. 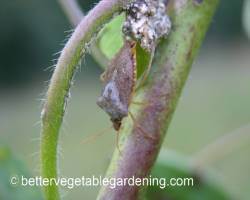 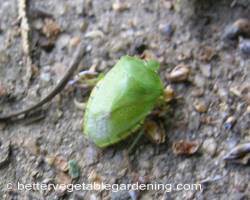 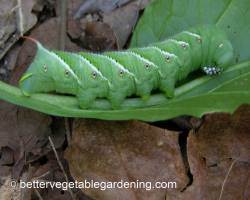 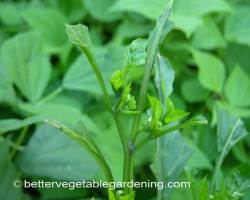 Caterpillars of both species feed on the foliage of various plants from the Solanaceae family. Potato, tomato, eggplant, chili peppers, bell peppers and tobacco to name a few common ones. The bell pepper plant in this picture was stripped overnight

Follow this link for a good article on White grubs

However, not all white grubs are bad, one beneficial white grub is the Bumble Flower Beetle (Euphoria inda) 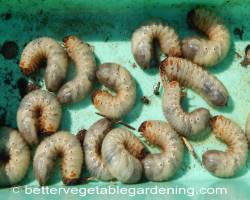 Easily identified by their large plump creme-colored bodies with 3 pairs of legs and an amber-colored head.

The "Click Beetle" is the adult stage of the wireworm. Other names include, snapping beetles, spring beetles and skipjacks. Most wireworm larvae are hard shelled, chestnut brown and varying from 1/2 to 1-1/2 inches (12-37 mm) in length when grown. The beetle its self does little or no damage to vegetable crops. However its offspring are a different story. 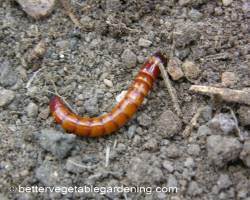 Although some species develop quicker most wire worms spend three or four years in the soil. They feed on decaying vegetation and the roots of plants. For the vegetable gardener the wire worm is not usually a major problem but susceptible crops are potato, strawberry and corn. 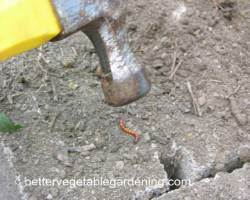 Some control methods aren't very efficient but have a certain "satisfaction factor".