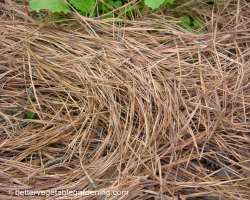 Pine Straw is the leaves of pine trees and are all carbon. Fresh pine needles are covered with a thick, waxy coating which breaks down with a little aging.

It was once believed that they acidify the soil. This gardening myth is just that, a myth and like all myths are very hard to dispel.

While it is often local in supply it can be purchased in small bales from many garden centers. Pine tree needles provide a great weed inhibitor and attractive rust color to your garden beds.

All organic sources have there good points and bad, pine tree needles in certain areas can harbor chiggers - jiggers. They are a microscopic mite that can cause intense irritation and are often found in areas with abundant pine trees.

Using this mulch for pathways is one use for this often abundant organic mulch source. 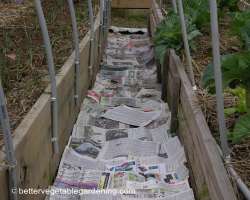 Similar to lining paths with bark, clear the area of weeds and put paper down first ensure a weed free path in the long term. 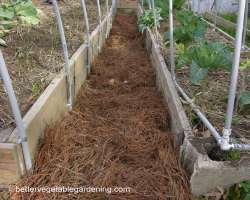 If you are using pine straw for garden pathway its a fair bet you are not buying it and it is an abundant free source. So put it on thick. Pine straw floats around for a while when first added but settles in and makes a lovely soft walkway. 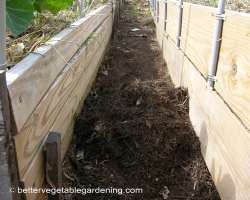 A pine straw mulch path will breakdown over a period of about 12 to 18 months and can be raked up and added to the veggie garden as good soil conditioner. 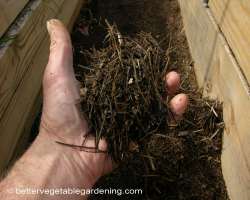 At this point pine straw from the path has broken down enough to lose its effectiveness as a path mulch. However it still has enough structure to be useful as a veggie garden mulch. 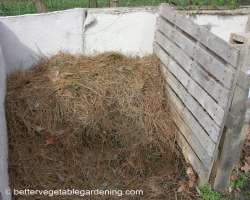 Raking up pine needles in the fall and storing for future use as a mulch can help to provide good mulch material all year round. This small pile will be added to over the fall and by winter all three bins will be over flowing with pine straw. 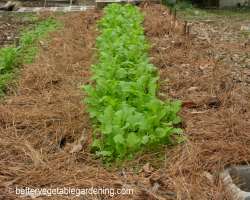 In the garden pine straw is both attractive and useful. While there are better mulches for weed suppression, pine needles are excellent to insulate against the extremes of heat and cold. 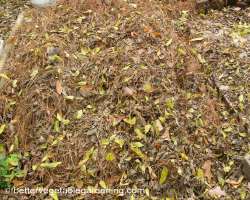 Rake up or acquire leaves of any type and mix them  together for mulch is much better than burning or overflowing municipal dumps with this useful resource.