Horticultural Vermiculite
As A Potting Medium 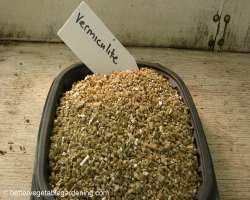 Horticultural Vermiculite Has Several Uses For The Home Vegetable Gardener

Vermiculite is those silvery-gray flecks you often see in potting soil. It is a naturally occurring mineral that is mined and heated until it expands into what look like tiny books. Vermiculite has a neutral pH, is sterile and insoluble. 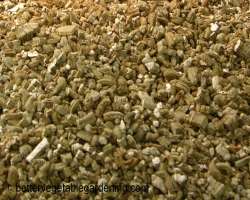 For starting seeds and growing on seedlings, a fine or medium grade is best, with a coarse vermiculite being used in potting soil mixes for older plants.

Use In Potting Soil

The principal value of vermiculite in any potting medium is providing aeration and improving water drainage, similar to perlite but with the advantage of having some nutrient content, magnesium, potassium and calcium. Vermiculite can hold large quantities of air, water and nutrients releasing them as the plant requires. However it is not as hard as perlite and if handled to roughly it will compact and lose its ability to hold both water and air. 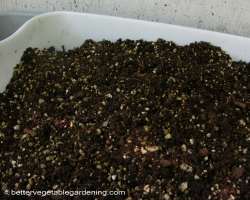 Vermiculite provides a good environment for seed germination allowing young seedling to freely emerge when used within a potting mix.

Vermiculite retains water well, soaking up water several times its original volume. In cases where the potting mix is to be used for plants that like plenty of moisture vermiculite is preferred. However for growing plants where good drainage is more important it is often better to use perlite instead. 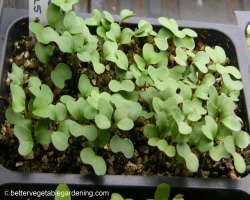 Vermiculite can also be used on top of potting mix to cover newly sowing seeds in trays or pots. Germinating seeds have no trouble pushing their way to the surface through this layer.

Horticultural grade vermiculite is a good media for growing plants, it is possible to grow most plants in vermiculite alone helping to provide lightweight support to seedlings as they emerge. 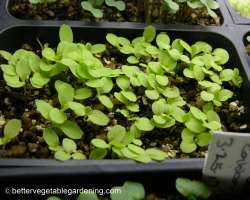 Although vermiculite does contain some nutrients there is not enough for seedling growth so a weak fertilizer solution when the first true leaves appear will be needed. 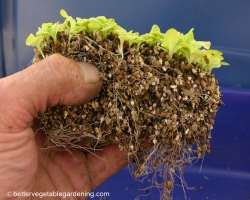 use in the garden

Out in the garden, use vermiculite as a soil conditioner to help sandy soil hold and retain moisture.

It is also very good for covering small seeds like carrots at planting time. Vermiculite retains moister well and is a sterile medium allowing carrot seeds to emerge unhindered by weed competition.