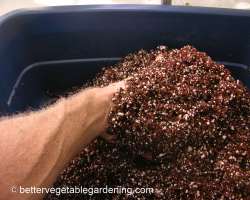 There are many reasons for a gardener choosing to make their own potting mix. Be it price, convenience or a desire to control what goes into the potting medium seeds are grown in, you will find making your own potting mix is not difficult at all. .

They can be as simple or complex as you wish, most ingredients are readily available either online or in most garden centers.

There are hundreds of recipes for the making of homemade potting soil or mixes so there is plenty of scope for those who enjoy experimenting to develop a recipe that works best for the type and size of plants they are growing.

Simplicity is the secret to a good potting mix, keep it simple and ensure the potting mix is going to supply the 4 basic requirements, aeration, water, nutrients and support and young vegetable seedlings will thrive.

There are only two types of potting mix that we need to concern ourselves with when growing vegetable seedling.

Every seed comes with a packed lunch that is used during the germination and early growth stage and will last until the seedling develops enough to start processing nutrients for itself.

While nutrients aren’t necessary in a seed starting or germination mix they are often included to simplify the task of seed raising. The traditional method of starting seeds in a tray to be pricked out  later when they develop their first true leaves is not always the best method in all situations. If starting seeds in seed cells or other individual seed pot types it is often necessary to include nutrients from the very start.

The recipe below is for starting seeds. It is also the base for other homemade potting soil that can have fertilizer added to be used in raising older vegetable seedlings.

A seed starting mixtures is very basic and only need to contain; 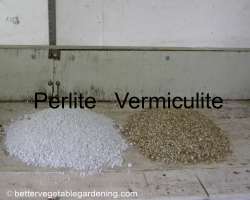 Some gardeners like to add both perlite and vermiculite to their potting mix. While both do a similar job there is a slight difference in properties. My preference is to use only perlite for starting vegetable seedlings.

However, getting off the track for a minute.  Plants grown in containers require a lot more watering than those in a garden situation. This is because of the small amount of potting mix they contain compared to the open garden. So when making a mix for growing in containers, I favor vermiculite because it tends to retain moisture better than perlite. 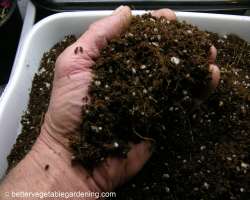 A potting on mix is different from a seed starting mix in that, after “pricking out” , or once the seedling has produced its first set of true leaves the young seedling will require nutrients. This mix, that includes plant nutrients, is also appropriate when starting seeds in pot types where the seeds will grow continuously in until it is time for transplanting. 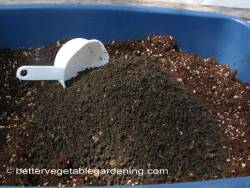 The nutrients in worm castings are in a water soluble form, making them immediately available to plants. Vermicompost will not burn even the most delicate plant roots so it is safe to use in all garden and nursery situations.

If the seedlings are going to be re potted again before transplanting to the garden do so with a fresh batch of the same potting mix as above. 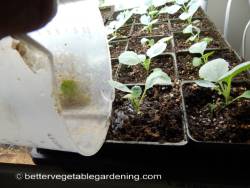 Using a weekly addition of liquid fish fertilizer diluted to 1/2 the recommended dose for young plants. Or mix worm tea with fish fertilizer half and half to give an excellent seedling fertilizer.

For an alternative recipe that adds a little more bulk to the mix use the recipe below.


Good compost is excellent for seedlings but poor compost can be disastrous. Ensure the compost has been properly made in a pile that has reached the correct temperature for destroying plant pathogens, unwanted weed seeds and pests. If in doubt don't use it, seedling confined to pots and seed cells are far more susceptible to these problems than older plants in other situations. 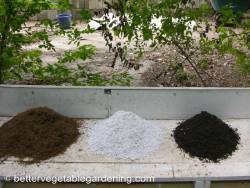 On the potting table:

Simplicity is the key; these homemade potting soil recipes are time tested and proven for growing strong, robust vegetable seedlings in minimum time and with little fuss.