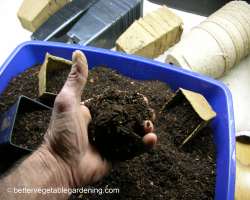 
Compost is often used in commercial potting soil mixes; even those not advertised as organic and are usually added as a substitute for peat moss. It has the added advantages of providing nutrients and can provide protection against some diseases due to beneficial organisms that live in compost.

While there is nothing better on this earth for a vegetable garden than well made compost, it does have certain limitations in potting mixes.

There are many gardeners who successfully use compost in seed and seedling potting mixes. Most have learnt from experience that a potting mix using alternative ingredients like compost requires a different approach than that used with a sterile soilless potting medium.

The potting mix is no longer a sterile potting medium.

Most importantly, compost used in potting mixes should have gone through a properly prepared hot compost process to ensure all weed seeds and plant pathogens have been eliminated. For this to occur the temperature needs to remain between 130-150 F (54-66 C) for at least 72 hours. For gardeners who make their own compost this can be achieved quite easily.

Many commercial composts contain industrial wastes mixed with high amounts of wood chips or wood by-products that are often not properly finished. Buy only from a trusted source when acquiring compost for adding to your own potting mix or buying a potting mix with compost added.


Photo One - Out of the bag this commercial compost doesn’t look to bad, while you can’t tell how well it’s been made, there are a few clues as to what it was made from. The photo below is the trash from this bagged compost.Mouse over image to enlarge.

Photo Two - Sifting any compost used for growing vegetable seedling through a 1/4 inch (5-6 mm) screen is a good move. It can also gives you a rough idea of the original organic material used to make it. Obviously this source was heavy on the forest products-wood chips, which is common for many commercial compost products.Mouse over image to enlarge.

Photo Three - Although this homemade compost is not yet finished notice the difference in the trash when sifted through 1/4 inch (5-6 mm) screen. No wood chips here, just some un-composted soft plant material. Remember quality count. Mouse over image to enlarge.

Regardless of its origins, commercial or home-made, it is difficult to control the nutrient value of compost because it depends heavily on the quality of materials used. Not only the nutrient value but also the composts structure can vary greatly from batch to batch even when the same materials are used to make it. Because of these variations it is difficult to produce potting mixes that are reliably consistent.

Nitrogen levels are one of the main problems in potting mixes with compost as the only source of nutrients. In this case it is necessary to add some form of nitrogen to keep seedlings growing forward. This can be either organic, in the form of blood meal, fish meal powder or other soluble organic or non-organic nitrogen fertilizers.

When using compost in a potting mix to grow seeds and seedling it is not advised to use compost alone. While compost can retain enough moisture and nutrients for plant growth, without other amendments well finished compost doesn’t have the structure to provide sufficient spaces for good aeration and drainage.


Where Vegetable Gardening Know-how and Passion Grow Together.